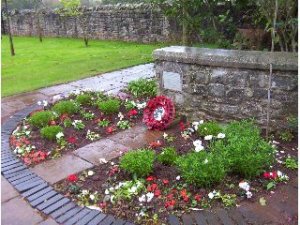 On 21st November 1944, Halifax LL126 of 1662 Conversion Unit Squadron of Bomber Command, with a Polish aircrew of seven, took off from its base at RAF Blyton, Lincolnshire, destined for yet another bombing raid mission.

At 19.30 hours the plane, having passed over a built up area went into a steep dive and crashed in a field alongside the All Saints Churchyard in Long Ashton. Regrettably all seven airmen perished. Remarkably there were no civilian casualties.

Local residents made repeated and gallant attempts to reach the crew of the burning aircraft, but the flames were too intense and any rescue impossible. Mrs Wilcocks who was one of the first to arrive at the scene, recalled that Mr Hodges, who was himself visiting friends in Long Ashton, had to be pulled away from the flames. Although he managed to reach the burning plane he was forced back by a sheet of flame which was so intense it forced him to the ground. Not deterred by its intensity, Mr Hodges returned to the burning aircraft and with the help of another rescuer managed to drag the body of the pilot out of the cockpit.

All those who witnessed the incident were unanimous in their agreement that the reason why there were no civilian casualties was entirely due to the skilful flying by the Polish aircrew who in the face of impending death still managed to steer the aircraft away from local houses, school and shops.

The aircrew was buried at the Polish Air Force Cemetery at Newark, and in memory of these seven brave airmen, a plaque, arranged by the Severnside Aviation Society, was installed on the wall of the Long Ashton Parish Council Cemetery abutting the Churchyard at All Saints.