In January 2022 North Somerset Council published its preferred options for how it plans to accommodate the 20,085 dwellings the government say we have to plan for. The proposals included a significant development of 2,500 homes next to Long Ashton, on and around Woodspring Golf Course.

In March there was a public meeting co-hosted by your two North Somerset Councillors (Ashley Cartman and Stuart McQuillan) and Long Ashton Parish Council, attended by planning experts from North Somerset Council to explain the reasoning, process and answer questions. This meeting formed part of the consultation process. 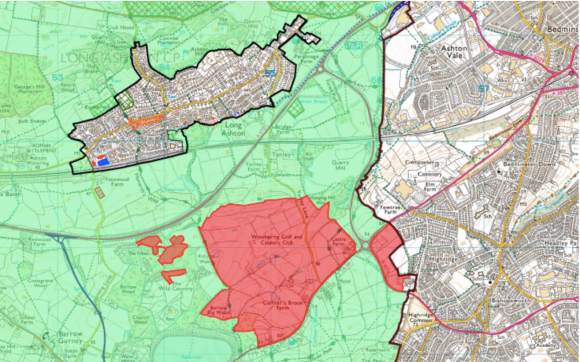 Proposed area for development at Woodspring (shown in red)

'This Council supports the desire of villagers for the protection of the valuable and irreplaceable Greenbelt land around Long Ashton including that at Woodspring Golf Course. We question whether the 2500 houses, the size of another Long Ashton, on this land are needed, given the numbers are calculated by central Government algorithm. We also question whether North Somerset Council has done enough to exhaust all options for development outside the greenbelt. We feel Greenbelt is more essential than ever for wellbeing, wildlife and as a resource to combat climate change. When it is gone we can never get it back. This is the tip of the iceberg. Developers will pounce on more spaces around us to render us a suburb of Bristol. We know affordable housing is needed in the UK but not at the expense of the Greenbelt.'

Although we have completed the questionnaire on your website we have been unable to fully express the views and concerns of our residents. Therefore I am asking you to accept this letter as part our response as a parish council to the consultation.

Our concern is that the proposal to build 2,500 houses in the green belt on the proposed site centred on the Woodspring Golf Course and inside the SBL at Lime Kiln Roundabout will become the first resort for development not, as it should be, the last resort.

Of course many people living elsewhere in North Somerset will call our concerns nimbyism, but we can honestly say that Long Ashton has taken more than its fair share of landfill sites and development. It is already the size of some small towns and at the limit of what can be called a village but lacks the appropriate facilities. We have lost our children's centre and our library. We do not want to lose our green belt as well.

On a national and global level, the IPCC report published in April 2022 should focus our minds on the true value of the green belt. Warming in Europe is set to continue faster than the global mean and that will increase cooling needs, food and water demands.

Fire prone areas are projected to expand across Europe at the same time as severe flooding events. Yet one of the main, quickest and cheapest ways to mitigate climate change is the restoration, expansion and connection of protected areas for ecosystems so why destroy a huge chunk of green belt land that is already mopping up carbon and providing a vital link between the Avon Gorge, the Lakes and the Mendips?

On a more local level, the past two years have illustrated the value of the green belt not just to us but to the people of Bristol who escaped the privations of lockdown by walking, running and cycling in the woods, parks and fields in our parish. It also demonstrated the vulnerability of the green belt to heavy use. Vegetation from bluebells and anemones to hedgerows and woods were damaged by sheer over-use. Small birds and mammals were visibly less present due to habitat disruption. Farmers complained of sheep-worrying, litter and fly-tipping. At last the land is beginning to recover but this experience demonstrates that the woods and fields cannot tolerate more intensive use.

Building 2,500 houses on many hundreds of acres of green belt land will not simply reduce the amount of green belt but will significantly reduce the wildlife corridors linking Ashton Court, Tyntesfield and Failand and prevent the implementation of the nature recovery networks identified by the West of England Nature Partnership. These proposed networks are invaluable to create a resilient ecosystem that is better suited to cope with the extreme weather events imposed upon us by climate change.

More pressure will be put on the ecosystem by increasing the number of people using the land for health & well-being. Bristol's plans to build Longmoor village and redevelop the Cumberland Basin will attract thousands more people who will also need access to good quality greens and bluespaces such as parks, woodlands, fields, streams and ponds.

The review from Public Health England in 2020 shows that good quality greenspace can help bind communities together, reduce loneliness and mitigate the negative effects of air pollution, excessive noise, heat and flooding. Disadvantaged grqups such as those, one could argue, living in south Bristol appear to gain a larger healthy benefit when living in greener communities or with easy access to good quality green and bluespace.

Anyone who lives outdoors might instinctively feel a boost from spending some time in our parks or woodlands but it is now formally recognized that green environments are associated with reduced levels of depression, anxiety and fatigue and can enhance quality of life for both children and adults.

In addition, the green belt should prevent the unrestricted sprawl of built up areas but, as your own assessment has concluded, building on the Woodspring site 'would constitute sprawl.' Allowing one development within the green belt will legitimise further development. We expect that Taylor-Wimpey will respond to your consultation by arguing for further development but as the paragraphs above show we wonder how Taylor Wimpey can ignore the problems that are at our door? Is the company thinking of the long-term future of our children and their children? Or simply, in the short term, its profit margins? To us, living in a world that is predicted to experience unprecedented change such corporate blindness is simply unacceptable.

We would also like to note that the green belt exists to prevent neighbouring towns merging into one another. Combined with the development inside the SBL and the expansion of the Barrow Hospital site, the proposal under consideration will create a continuous strip of development from southwest Bristol to Wild Country Lane. Your own assessment of the green belt recognises the risk of the merger of Bristol with Nailsea and Backwell, and the consequent loss of identity for Long Ashton.

North Somerset Council has declared a climate emergency and in 2020 declared a 'nature emergency' stating that the threat of mass extinctions and loss of biodiversity must be at the heart of every decision North Somerset Council makes. The Woodspring Golf Course has some outstanding habitats including mature shelter belts of native trees and shrubs, an extensive water catchment area with ponds and water courses and areas of long grass that shelter voles and mice. Swallows feed in the skies above; barn owls, kestrels and buzzards hunt over the grasslands. Since the membership has declined from 2000 members to 49, the area has become a refuge for many animals. Before long, skylarks could join the throng.

Instead we recommend that:

NSC (SP8: Housing): The government’s housing requirement for North Somerset is 20,085 dwellings over the plan period. This Preferred Options identifies capacity for about 90% of this total. How should we make up the shortfall?

OUR VIEW: Support with amendments

The proposals allocate 18,046 houses, a shortfall of 2,039 from the governments housing target for North Somerset.

We question the basis upon which the government's algorithm has calculated North Somerset Councils housing allocation. We agree that new housing needs to accommodate the natural population growth of North Somerset as well as provide for some people moving into the area. However, the number allocated seems to provide housing for significant population migration from other areas. These excessively high numbers appear to be justified upon the spurious basis of 'affordability'.

Additionally, North Somerset has extensive tracts of land classified as either green belt, land susceptible to flooding, or as an Area of Outstanding Beauty. This makes it harder for us to accommodate significant housing growth than other areas of the UK. We believe no consideration has been made for these restrictions in calculating our share of national housing targets.

We ask that North Somerset Council write to government to both question the basis of the housing allocation and to request that our numbers be reduced by at least the current shortfall on the draft proposals.

Our view is that North Somerset Council has failed in its duty to properly consider sites outside of the green belt. It is of paramount importance that any further allocation should not permit the urban sprawl of Bristol. Accordingly, the following sites/areas outside of the Green Belt should be reconsidered:

OUR VIEW: We support NSC's ambition to provide 40% affordable housing with the following amendments/comments

NSC (SP9: Employment): Are sufficient sites for employment been identified to meet business needs and are they in the right locations?

SP9 notes 'around 30ha of additional land to be identified at the strategic growth areas'. It is noted that 10 hectares of this is to be found at Woodspring. If the Woodspring site is allocated, we welcome the integration of employment land into the site. This should help build a more economic and environmentally sustainable community. We support this as a principle of strategic planning across the district.

Our view is that the 10 hectares allocated at the Woodspring site is adequate for both the new development as well as the existing community. We would oppose any further land being allocated at this location.

Too many people already commute into Bristol from other parts of North Somerset. Any additional requirements for employment land should be met elsewhere in the district to encourage and enable people to work closer to home.

NSC (SP7: Green Belt): Do you support the conclusion that it is necessary to consider locations for development within the Green Belt?

The National Planning Policy Framework sets out very clearly that 'Green Belt Boundaries should only be altered where exceptional circumstances are fully evidenced and justified' (NPPF para 140). Furthermore, the NPPF states that before concluding that an amendment to the Green Belt is necessary 'the strategic policy making authority should be able to demonstrate that it has examined fully all other reasonable options' (NPPF para 141). North Somerset Council has not fully examined all other reasonable options.

In support of our view, we present a number of issues where we believe further examination is required.

NSC (SP3: Spatial Strategy): Is the mix and location of sites appropriate to deliver the plan’s objectives? In particular, is the balance between town and village development appropriate?

No, the balance is completely wrong.

We need to enable a diverse range of housing stock. This includes rural as well as urban locations. The current plans see new housing pushed into limited high-density locations. It will accentuate a rural urban divide where increasingly only the wealthy can afford to live in the countryside. Housing should be provided across the district and not just in 'strategic locations'.

As noted above, the combination of the rapid decarbonisation of transport and changing work patterns have weakened the sustainability arguments for concentrating development into a small number of areas.

These measures would ensure a more equitable distribution of new housing growth and be a better reflection of where our residents want to live.

NSC (SP4: Placemaking): How can we increase the quality of new development in North Somerset to create attractive new communities?

OUR VIEW: Support with amendments

We welcome recent changes to the National Planning Policy Framework that allows councils to refuse planning permission for poor quality, and poorly designed development. In turn we support policy SP4:Placemaking which seeks to set out what good development means in the context of North Somerset.

With regard to this we propose three amendments/comments: